06-07-2022 - Begonias, the Right to Lie, SCOTUS Decision Coming Up, Steve Bannon, A Column from the Local Paper

There is only one overriding issue of political concern right now, encompassing much of what appears on this blog. That is how to defeat Republicans on Nov. 8, only 22 weeks from now. The future of democracy in the United States is at stake. Really.
To win in November, Democrats must capture the votes of women and persons of color, groups whose Republican actions consistently attack through their opposition to preserving both abortion rights and voting rights.
JL
* * * *

Keep Your Eyes on the Supreme Court (NYSR&PA vs. Bruen)

Within a short time, the Supreme Court will rule on a New York State law limiting the open carrying of weapons.  They heard arguments back in November, but since then there have been several mass shootings which might have changed their thinking. That case, New York State Rifle and Pistol Association vs. Bruen, will offer them the opportunity to modify the horrendous Scalia misinterpretation of the Second Amendment. If they do not, we are in for more gun violence in days to come.

Let’s Guarantee the ‘Right to Lie’

Believe it or not, Texas Congressman Louis Gohmert actually said the following in regard to the arrest of Peter Navarro, an adviser to the defeated former president, who had ignored a subpoena and being found in contempt of Congress., “If you’re a Republican, you can’t even lie to Congress or lie to an FBI agent or they’re coming after you.”  Unbelievable!  This idiot Congressman doesn’t recognize that lying under oath to the FBI or to a Congressional Committee is a crime.  He probably would be in favor of a Constitutional Amendment guaranteeing the ‘right to lie.’

(If you haven’t already read about this in the papers or seen it on TV news, you should switch channels and newspapers, your likely sources of information.)

Gohmert claimed that Democrats were treated differently and cited one example.  Unfortunately for poor Louis, that example (Attorney Michael Susmann) was recently found not guilty of lying to the FBI by a jury. That’s a distinction too hard for this stupid Texan to comprehend. But watch and see! The people in Texas will be dumb enough to re-elect him. Just so long as he loves guns and hates abortions.  Just watch. 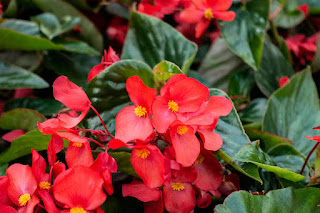 Days are hot here in Florida in the Summer.  Too hot for some people and too hot for some plants.  Therefore, I have gotten rid of the impatiens in my garden and flowerpots, whose only chance of survival are generous daily waterings.  More adaptable to summer heat are begonias which are happy with both the sun and occasional rain.  Watering during a dry spell, if needed, can be done once a week.  In October, the begonias can be replaced with impatiens.

A Comprehensive Commentary from the SunSentinel

(This piece was published online on June 3 as exclusively for SunSentinel subscribers, but in the interest of preserving American democracy, I am passing it on to readers of this blog.)

Twenty months after the presidential election, boats motor along the New River with “Trump Won” flags flying and very, very loud country music blasting from the cockpit. It’s not enough to “own the libs,” they intend to bust their eardrums.

Around town, “Trump Won” flags and banners flutter from pick-up trucks and front-yard flag poles, warning those outside the sway of QAnon that the 2020 election ain’t over.

“Let’s go Brandon” banners hang from houses, forcing neighbors to explain a vulgar euphemism to the kids. Even among the multi-million-dollar waterfront mansions along North Gordon Road in Fort Lauderdale, residents have suffered, for months, the middle-school scenario of a fading Brandon banner draped from a neighbor’s house.

Trump zealots cling to the Big Lie with angry militancy. As if daring someone, anyone, to claim otherwise. As if the Jan. 6 desecration of the U.S. Capitol was fair warning for how they’ll deal with latte-drinking libs, fems, gays, techies, immigrants, environmentalists, professors, BLM sympathizers and wimps plotting to take away their AR-15s.

Instead, his supporters cite QAnon conspiracy theories. Or they embrace woeful arguments offered by Trump’s cabal of unscrupulous lawyers, whose lawsuits alleging election fraud have been tossed, so far, 63 times. According to the Washington Post, judges rejecting election fraud lawsuits include 38 Republican appointees, including several chosen by Trump himself.

Trump lost, yet Trumpism, the loud, angry, confrontational F-U populism he stoked, has prevailed. The minority party, which thanks to the self-obsessed Trump’s ineptitude lost the White House and both congressional chambers, has retained its grip on American governance.

When it comes to assault weapons, abortion rights, climate change, pandemic policies, immigration, statehood for Puerto Rico and the District of Columbia, recreational marijuana, health care, mass transportation and alternative energy, right-wing populists still control the agenda. And that agenda is no, no, no, all down the line.

Republicans maintain minority rule, thanks to a Constitution — crafted to favor an agrarian society — that lends rural, small-state, religious conservatives disproportionate clout in the Electoral College (giving a Wyoming voter 3.5 times more power than a Floridian). Same formula applies to the U.S. Senate, where in an evenly divided chamber, Democrats represent 41.5 million more constituents than their Republican counterparts.

Because Republicans are far cleverer than Democrats in the dark art of gerrymandering, they also enjoy outsized oomph in the U.S. House of Representatives. And in state legislatures. For example, in Florida, a state in which Democrats lag Republicans in voter registration by less than a percentage point, the GOP has 101 seats in the upper and lower chambers of the state legislature, compared to 58 occupied by Dems.

Now it appears that a very conservative Supreme Court, thanks to three appointments by a president elected with 2.9 million fewer votes than his 2016 Democratic opponent, has decided states can outlaw or sharply limit abortion rights.

Red states will do just that. Essentially, a religious minority will be dictating an anti-abortion policy that, according to a string of national polls, 60 to 75 percent of Americans (and Floridians) oppose.

The New York Times reported Thursday that “at least a half-dozen current and former Proud Boys” — a gun-toting, alt-right, neo-fascist, anti-feminist, ultra-nationalist outfit — have wormed their way onto the Miami-Dade Republican Executive Committee. They include two members facing criminal charges in connection with the Jan. 6 attack on the Capitol: one for obstructing Congress, the other for interfering with a police officer.

Enrique Tarrio, the national chairman of the Proud Boys, is in jail, awaiting trial on conspiracy charges in connection with the capitol insurrection. Tarrio, an ex-con from Miami, is also the former Florida state director of Latinos for Trump.

Which says something about the political-fringe weirdness infecting the GOP. This is sure not your father’s (or Jeb Bush’s) Republican Party.

Fred Grimm, a longtime resident of Fort Lauderdale, has worked as a journalist in South Florida since 1976. Reach him by email at leogrimm@gmail.com or on Twitter: @grimm_fred.

I agree with Fred, as the defeated former president might say, 'bigly.'

Steve Bannon is a Bad Person

If you’ve nothing better to do and aren’t yet convinced that Steve Bannon belongs in either a mental institution or a prison, read the article by Jennifer Senior in the Atlantic.  Check it out at

IF YOU LIKE THIS BLOG, PLEASE FORWARD IT TO AT LEAST ONE OR MORE FRIENDS OR FAMILY MEMBERS WHOM YOU FEEL MIGHT ENJOY READING IT.  Suggest that they visit www.jackspotpourri.com.  A simpler method might be to click on the envelope at the bottom left corner of each posting, which looks like this

. Clicking on it makes it easy to forward a very basic, abbreviated version of the blog.   Really though, refer them to the website, www.jackspotpourri.com.  That gives them a much better version!