Racial and Economic Equality, Tongues & Lips and a Shortie from Sid

The civil rights legislation passed in 1964 locked in racial equality in this country from a legalistic standpoint.  But fifty years after Martin Luther King’s address to a quarter of a million in front of the Lincoln Memorial in 1963, it appears that there still is a way to go in turning that legalistic equality into real equality.

(Forget the efforts by some legislators at the state and federal level to modify that legalistic equality by attempting to suppress voting by passing more restrictive election laws thinly veiled as attempts to curtail voter fraud.  They really are just the last whimpers of a dying political party’s efforts to avoid the oblivion which real equality for all Americans at the polls would bring about for it.  They really are just present-day high-sounding efforts to bring about what the assassins of Martin Luther King and Medgar Evers were trying to do … keep the descendants of the slaves “in their place.”)

Africans, brought to this country as slaves, represented the antithesis of economic equality.  A slave is not the economic equal of someone who has their own freedom.  This was true of slaves in the Bible and in ancient Greece, for example, where their status was not a matter of skin color.  Once slavery was ended in this country, however, equality was not automatic despite its being “on the books.”   Even though former slaves and their descendants in this country were readily identifiable because of their skin color, their inequality was not entirely based on race, but to a considerable extent, it was based on the results of their economic position as well.

Aside from the presence of union leaders in it, the civil rights movement has handled this question of economic inequality rather delicately.   Some have talked about former slaves and their descendants being entitled to some sort of “reparations” for generations of involuntary servitude in this country.  Some have talked about wider systems of wealth redistribution as a tool to iron out economic inequality.  But such broader steps would remove the racial aspect from the question since any redistribution of wealth in the United States would be something applicable to all Americans, not just the descendants of former slaves.


For example, an increased minimum wage, higher taxes on the wealthy, a stronger economic safety net, as well as more money poured into education and health care would benefit all Americans, regardless of their race.  Of course, with many Afro-Americans at the bottom of the economic ladder, this type of wealth redistribution would be of greatest significance to them, even though it would be of benefit for many others who also are struggling to take advantage of the economic opportunity this nation offers.

Bayard Rustin in 1963, one of those with leanings to the left of Dr. King.

Many had socialist or communist backgrounds and had agendas which went far beyond a quest for racial equality, and they were there on the Mall with Reverend King in Washington in 1963.  If Martin Luther King had lived, I suspect his efforts to achieve racial equality would have evolved more strongly into attempts to achieve economic equality as well.  He probably would have been present at the “occupy” demonstrations a few years ago and certainly would be supporting the ongoing efforts of fast-food workers to earn a living wage from jobs which presently provide some full time workers with salaries below the poverty line.

Without economic equality, racial equality will be difficult to achieve.  We don’t need socialism, however, to do this.  Our capitalist, free-enterprise system can be sufficiently “tweaked” to create the well paying jobs necessary to bring this about.  If that system can be made to work for the benefit of all Americans, regardless of race, it then will be possible to achieve the kind of real racial equality envisioned by Reverend King when he “had a dream.”


Check out the August 11 posting on this blog for details of our short story contest which will run until the end of the year.  We already have submissions from Sid Bolotin and Harvey Sage, but would appreciate entries from some of our other talented followers.  Incidentally, there's a short story from Sid included on this posting which will not be in the contest, but take a look at what he has done, using my lead-in phrase as his starting point.  You can do it!


Although this may be repetitive, the deadline for submissions to the contest is December 31.  Limit your story to 1000 words and it must start with the following sentence: “I could hear the floorboards on the porch, weathered by years of exposure, creaking in the night.”  Doing it this way puts all entrants on an equal footing.  Finally, please limit your entries to one.
There are many guidelines to writing short stories on the internet.  Just “google” or “bing” the words “writing a short story” and a plethora (wow) of information will be available to you.  An example are these rules cited by the late author Kurt Vonnegut. It might be difficult to follow all of them but I think rules 4 and 7 are worth exploring.  And there is much more help available online.

Of Tongues and Lips

There's a commercial on TV for Apple showing all of the wonderful things people can do with their smartphones, which in this case is an Apple IPhone 5.   There's a delightful musical background in the ad, but no one, I repeat, no one, speaks a word.  They are doing a lot of things with their fingers, but not a word is spoken. 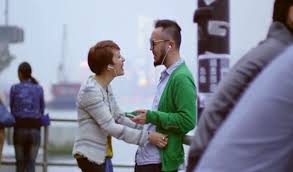 As depicted in the IPhone TV ad, but why can't he just tell her what he has to say.

It's as if tongues and lips were intended exclusively for the purpose of ingesting food.  I suppose these organs will continue to serve that purpose, but their use in molding and formulating the breath sounds which are the basis of spoken speech may be becoming obsolete.

Even "duh" will be obsolete

So long as lips and tongues are needed for eating, I suppose they will survive, but once we can get our daily nutrition from a pill or injection, they will serve no purpose whatsoever and disappear over future ages through Darwinian selection whereby mutants born without tongues or lips will have a greater chance of survival and reproduction than those whose bodies waste energy supporting such useless and non-functional organs.  After all, with smartphones, who needs to talk?

Hey, she can still text!  Or tweet!  And if she gets hungry, she takes a needle!
JL

I could hear the floorboards on the porch, weathered by years of exposure, creaking in the night. Jeremiah lay folded with his back to me in our classic spoon position, so I snuggled closer to him and whispered, “What is that? Is someone on the porch? I’m scared, Jeremiah.”


“No need to be, sweets. It’s most likely just the she bear coming out of her hibernation and scouting the cabin to see if I’ve left any food littered about. She’ll sniff around for a bit and then wander back to her den where she most likely has one or two cubs that she birthed during her long sleep.”

With his calming words easing my angst I turned my thoughts to how I had arrived in bed with this real, live mountain man. I had read about such men in books and had loved watching reruns of Robert Redford in his lead role as Jeremiah Johnson, a soldier who flees the Mexican War in the 1840’s to live as a hermit.

I had been so abused as a schoolgirl because half my face was covered with a Port-wine birthmark, that I fled the city of my birth as soon as I could in an attempt to find acceptance somewhere, anywhere. My decades-long wanderings eventually led me to Monson, a small town in northern Maine near the end of the Appalachian Trail and the closest town to Maine’s One Hundred Mile Wilderness.

With its less than 700 residents I found a haven of acceptance and an escape from the years of ridicule. I got a job at the town’s General Store that also supplied the hundreds of avid hikers and bikers that pulspassed through on their treks. It was there that I met my own Jeremiah when he came in for supplies for his life in the remoteness of the Maine forests. He thought I was beautiful and never seemed to be reed by my disfigurement. He wasn’t Redford, but I fell head over heels in love when I first waited on him.

It didn’t take much for me to accept his offer to join him in his cabin in a primordial section of the wilderness. He clearly explained the major conditions I’d be living under…no electricity, no indoor plumbing, surrounded by wild life of every sort. Because I was blissfully enchanted by this modern-day pioneer who filled my emptiness with his unconditional love, within a week I had packed my minimal belongings, hopped on his snowmobile, and left Monson and my former life behind.

Dreamily I wrapped my arms tighter around Jeremiah and whispered to myself, “With all the torment I’ve lived through, what’s the worst the bear could do? Eat me?”

(For those of you considering entering the Short Story Contest, this is an example of the kind of entries for which we are looking.  This 457 word gem will not be in the contest.)  JL

Most readers of this blog are alerted by Email every time a new posting appears.  If you wish to be added to that Email list, just let me know by clicking on Riart1@aol.com and sending me an Email.   BY CLICKING ON THAT ADDRESS, (shown above in red) YOU CAN ALSO SEND ME YOUR CONTRIBUTIONS TO BE PUBLISHED IN THIS BLOG AS WELL AS YOUR COMMENTS.   I am just a click of your mouse away.

Also, be aware that www.Jackspotpourri.com is now available on your mobile devices in a modified, easy-to-read, format.
* * *   * * *   * * *
To view older postings on this blog, just click on the appropriate date in the “Blog Archive” off to the right, or scroll down until you see the “Older Posts” notation at the very bottom of this posting.  The “Search” box can also be used to find older postings.

To send this posting to a friend, or enemy for that matter, whom you think might be interested in it, just click on the envelope with the arrow on the "Comments" line directly below.   Even better, let me know their Email address so that they may be alerted to future postings.