Recently, on a Caribbean cruise, we stopped at St. Thomas in the United States Virgin Islands.  While shopping on the main street of Charlotte Amalie, the capital, we wandered into a courtyard and were confronted by an old building bearing a weathered plaque denoting it as the birthplace of Camille Pissarro (1830-1903) whom many consider to be the father of Impressionist painting.  We never knew he had been born and raised in the Caribbean. 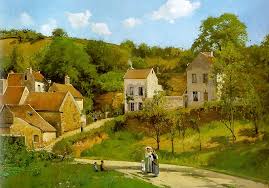 Over his lifetime, Pissarro had seven children who together with their descendants, included at least a dozen painters.  One branch of Camille Pissarro’s family, that of his youngest son, Paul-Emile, was particularly prolific, art-wise.  Two of Paul-Emile’s children, Yvon and H. Claude, were noted painters and one of H. Claude’s children, Lelia, born in 1963, is a renowned painter today.

So it was that just a few months after visiting Camille Pissarro’s birthplace, we had the opportunity to meet his great grand-daughter, Lelia, at the Palm Beach Art and Antiques Show.  She too had visited his birthplace in St. Thomas and was disappointed, as were we, to see that the building has been converted for other uses and that only the plaque remains to commemorate the father of Impressionism.
Jack Lippman

The President, Congress and "Sequesteration"

The majority of the people in this country voted Democratic and re-elected Barack Obama for a second term in 2012.  This was despite the fact that the majority of congressional districts in this country voted Republican and continued a Republican majority in the House of Representatives.  This is a result of the way districts are drawn by State Legislatures, which along with most governorships, are in the hands of Republicans. The Senate has a Democratic majority, but it is not great enough to prevent Republicans from often having their way in the upper House.  This is one of the ways in which it turns out that our system of checks and balances works to prevent any one party from controlling the country.  That is good.

But it is also bad in that it prevents important and necessary things from getting done. The “sequester,” which will severely curtail the funds available to run our government, and hurt both individuals and the economy badly, was intended to be a “poison pill” threat to force disagreeing parties to compromise in regard to spending cuts and additional revenues.  It was to take place back in January, but it was agreed to postpone that “fiscal cliff” until March 1.  And now that date is approaching and it looks like nothing is going to be done.  The roadblock to doing this is the failure of both the Republican majority in the House and President Obama to agree to compromise.  Both say they are willing to do so, but really, neither is.  Why?


Enough Republican Representatives in Congress feel that holding fast to a policy of no further revenue (tax) increases but more spending cuts will not hurt their chances to be re-elected.  While the President says he is willing to compromise, even going so far as to offer cuts in so-called “entitlement” programs to get some revenue increases, opposing him and not compromising will not cost the Republicans many, if any, Congressional seats.  Indeed, Republicans who are willing to compromise with the President are opening themselves up to a primary challenge from the right.

The core of the problem for the Administration, then, seems to be to get some of these solid Republican Congressional districts to elect Democratic Representatives.  Back in the 1920s, the Republicans controlled Congress, as they do today.  But after the stock market “crash” of 1929 and the accompanying Great Depression, things got so bad for most Americans that even some of the most rock-ribbed Republican districts elected Democratic Congressmen and Franklin Delano Roosevelt got his “New Deal.”  In the 1932 elections, the G.O.P. lost 100 seats!

It is conceivable that President Obama may feel that the dire economic problems which will be caused by the “sequester” will so affect Americans throughout the country that enough G.O.P.-dominated districts will turn out their Congressmen, replacing them with Democrats, as they did in the days of FDR.  That may be why, despite what he is saying, the President is really unwilling to give the Republicans much of what they are asking as the price of compromise at this time. The distress which the "sequester" will cause can be a potent weapon for the Democrats in the 2014 Congressional elections.

Obama will have a tougher time pulling this off than FDR did because in the 1930s, many conservative districts in the south always voted solidly Democratic, memories of the Civil War and Reconstruction still preventing them from voting for any Republicans.  Lyndon Johnson’s advocacy of civil rights ended this, turning the Solid South from a Democratic bastion into the conservative base of the G.O.P.

The Republicans are capable of remembering the lean years of the 1930s and  fearing a similar loss of seats in the Congress if the “sequester’ takes place, they might very well come around to agreeing with the President’s vision of compromise.  I doubt that this will happen by March 1, but I hope it happens shortly thereafter, for the sake of maintaining a viable two party system.
JL

“Firefox will install your latest updates.  It will take a few moments.”

“Turn off your cell phones and other electronic devices; the film will start momentarily.”

“Thank you for taking my call.  This will only take a moment.”

The dictionary defines the word “moment” as meaning “a minute period of time” or “an instant.”

But Firefox (or Apple) might take up to ten minutes to install their updates, or they may take five seconds to do it.  But they don’t want to tell you this because they really don’t know, so they use the word “moment” which could refer to either.

The last time I was told that the movie would start momentarily, they meant a period long enough for those in the theater to go to the bathroom or go to buy some more popcorn.  But it relieved them of the task of telling you how long that unknown period of waiting would actually be, of which they had no idea.  And the salesperson on the phone is implying what he or she has to say will just take a minute, but he didn’t say that.  He used the "weasel" word “moment” which could be whatever amount of time it takes for his or her pitch to be made.

One man's moment may be a few seconds, another's might be a minute or two and still another might mean a longer, but not too much longer, period.  Personally, I prefer "minute" or "a few minutes" rather than "moment" and "momentarily." I hereby propose removing those two words from the dictionary..  Both are guilty of the sin of imprecision. People should say what they mean.
JL

As Seen on Fox News

Watching TV last week, I was hearing how there was no reason other than obstinacy for the Republicans to oppose President Obama’s recently “leaked” immigration reform program since it included everything they had been advocating.


The plan, as reportedly "leaked" to USA Today, called for an eight-year path to permanent residency for undocumented immigrants, who would face a criminal background check and have to pay back taxes, learn English and get a new "lawful prospective immigrant" visa.  The President had earlier stated his commitment to continuing to strengthen border security, creating an earned path to citizenship, holding employers accountable and streamlining legal immigration.

Apparently, the only reason they were opposing it was because it had the President’s name associated with it.  “Well,” said I, “I’m hearing this on MSNBC, which is just a den of liberals.  Let’s see what I can find on Fox News.”  So I switched channels to Fox News.
No, they were not talking about immigration reform, probably because they hadn’t yet figured out how to oppose what so many on their programs had been advocating.  But I did hear an interview with an ex-Congresswoman who was a survivor of the mass shooting in a Texas cafeteria some years back.

Survivor of 1991 Texas Shooting on Fox


She explained how she had been prevented from firing back at the mentally deranged killer because Texas law at that time unfortunately had forced her to leave her weapon in her car and stopped her from defending herself.  Before I switched back to MSNBC, where sanity prevailed, I caught the beginning of a commercial on Fox offering for $9.95 plus shipping and handling a book entitled “The Obamacare Survival Guide.”

As advertised on Fox News

Fox viewers seem to be hunkering down in an effort not only to defend themselves against gun violence by having their own weapons to fire back with, but are also trying to figure out how to avoid being strangled by the government’s efforts to enable all Americans to be able to purchase health insurance.  Clearly, they are on the defensive.  Sooner or later they will discover, as Pogo did some years back, that “We have found the enemy and they is us!”
JL

Also, be aware that www.Jackspotpourri.com is now available on your mobile devices in a modified, easy-to-read, format.    Look for it there.
Jack Lippman
* * *   * * *   * * *
To view older postings on this blog, just click on the appropriate date in the “Blog Archive” off to the right, or scroll down until you see the “Older Postings” notation at the very bottom of this posting.  The “Search” box can also be used to find older postings.

To send this posting to anyone you think might be interested in it, just click on the envelope with the arrow on it on the "Comments" line directly below.